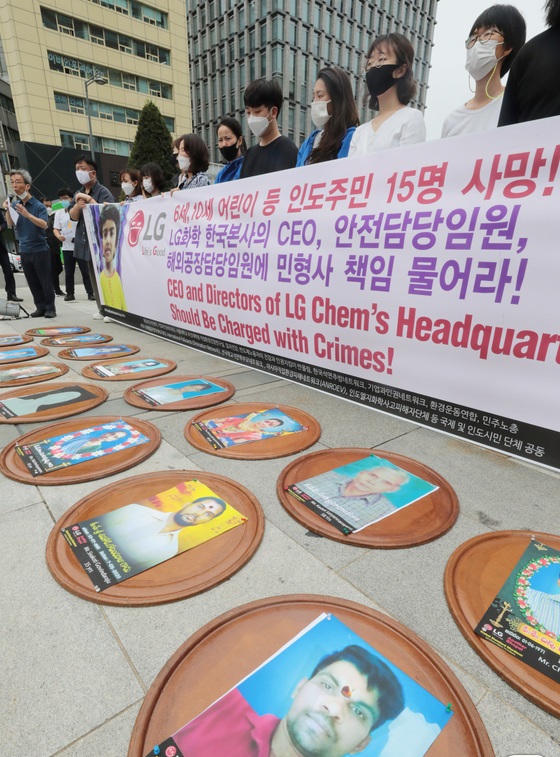 <Demonstration in Seoul against LG Chem on July 14>

The South Korea-based NGO Centre for Environment and Health has demanded that the country’s LG Chem should take full responsibility for the death of 15 innocent people, including children aged 6 to 10, following gas leak at its plant in Vizag, Andhra Pradesh.

The gas leak took place took place on May 7 at the LG Polymer, owned by LG Chem, South Korea.

Also wanting the company to fully compensate to the 585 persons who were taken ill, as also the “huge damage" to crops, soil and water contamination and losses of numerous domestic animals and cattle, the NGO said in a statement, not just the local director of LG Chem's India plant, but also the chief executive officer of LG Chem Korea headquarters, the safety officer, and the overseas factory officer, apart from other directors, should be charged with “civil and criminal responsibility.”

Insisting that LG Chem’s “apology statement” and “promise” to do their best to respond to the damages and communicate transparently has not gone far enough, the NGO said, the company “has not announced the cause of the accident, the countermeasures for damages, and liability for more than two months.”

“In the early stage of the accident, LG Headquarters CEO Hak-cheol Shin reportedly planned to go to India to oversee what had happened, but lowered the level and sent instead eight junior personnel”, the statement said, adding, “Local residents in India expected the LG Headquarters support team to actively respond to the damages, including finding and supporting the deceased family and assisting victims in hospital treatment.”