“To solve the humidifier disinfectant problem… 'State's responsibility' should be acknowledged and hug us.” 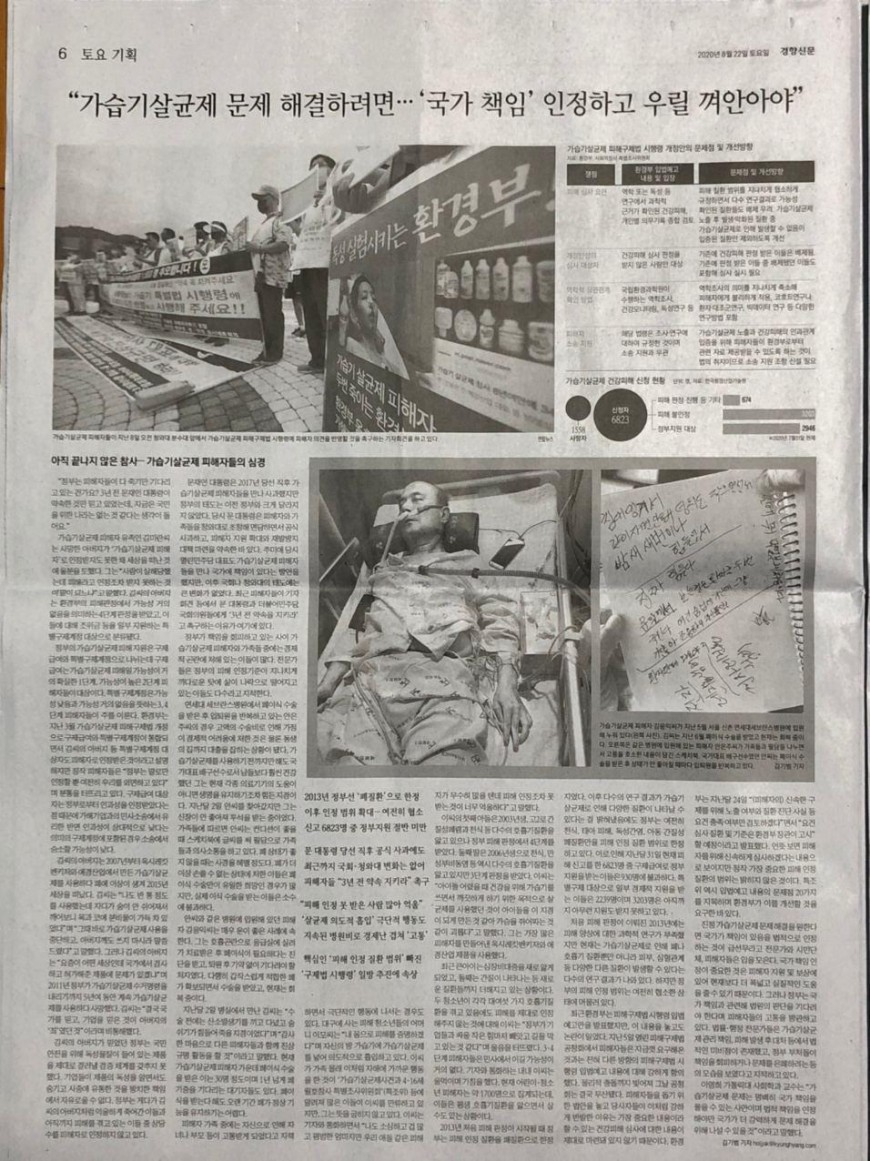 “To solve the humidifier disinfectant problem… 'State's responsibility' should be acknowledged and hug us.”

The tragedy that is not over yet... The heart of the humidifier disinfectant victims

Victims of humidifier disinfectants are holding a press conference in front of the Blue House fountain on the morning of the 8th to urge victims to reflect their opinions in the Enforcement Decree of the Humidifier Disinfectant Damage Relief Act. yunhap news

Immediately after the election of President Moon, there
has been no change in the National Assembly and the Blue House until recently, despite an official apology,
urging victims to “Keep the promises three years ago”

“Is the government just waiting for all the victims to die? I only believed in what President Moon Jae-in promised three years ago, but now I think there is no country for the people.”

Mi-ran Kim, a survivor of the humidifier disinfectant victim, vomited in resentment that her deceased father passed away without being recognized as a ``humidifier disinfectant victim''. He said, "Does it make sense that a person was murdered and not even recognized as a victim?" Kim's father received a four-stage judgment, which means that there is little possibility in the damage judgment by the Ministry of Environment, and was classified as a target of a special relief account that partially subsidizes condolence money and the like.

The government's support for damage to humidifier disinfectants is divided into relief benefits and special relief accounts. Relief benefits are targeted to victims of stage 1 and stage 2, which are most likely to be damaged by humidifier disinfectants. Special relief accounts are dominated by victims of levels 3 and 4, which mean less and less likely. The Ministry of Environment explained that the remedy benefits and special relief accounts were unified as a result of the revision of the Humidifier Disinfectant Damage Relief Act in March. “There is,” he is in anguish. Relief benefit recipients are advantageous in civil lawsuits against the offender because they have been recognized by the government for causality, but if they are included in the relief account, which means that causality is relatively low, they are less likely to win the lawsuit.

Kim's father died in 2015 due to an abnormality in his lungs after using a humidifier disinfectant made by Oxyrekit Benckiser and Aekyung Industrial in 2007. Mr. Kim said, “I also used about half a bottle, but I couldn't breathe while sleeping, so when I woke up, my throat and nose were full of secretions,” said Kim. However, Mr. Kim's father said, "What kind of world is this now, and what is the problem with the products that have been inspected and approved by the state?" Mr. Kim grieved, saying, "It was my father's'sin' to believe in the country and the company in the end."

The government, which Kim's father believed, did not have a verification system to properly filter out products containing toxic substances for public safety. Companies can't be free from the responsibility of knowing the toxicity of a product, but hiding it and neglecting what was distributed on the market. Furthermore, the government does not recognize as victims many of those who have died unjustly, like Kim's father, and those who are still suffering.

President Moon Jae-in met victims of humidifier disinfectant right after election in 2017 and apologized, but the government's attitude did not change much from the previous government. At the time, President Moon invited the victims and their families to the Blue House, made an official apology and promised to expand victim support and prepare measures to prevent recurrence. At the time, the Democratic Party representative Chu Mi-ae also met with the victims of humidifier disinfectant and made a statement that the state was responsible, but there was no significant change in the attitude of the National Assembly or the Blue House. This is why victims recently urged Democrats to keep the promises of three years ago, along with President Moon at press conferences.

While the government is evading responsibility, many victims of humidifier disinfectants and their families are in financial trouble. Experts point out that there are many people whose lives are falling to hell because the government's standards for accreditation are too strict.

Eunjoo Ahn, who is repeatedly hospitalized after undergoing lung transplant surgery at Yonsei University Severance Hospital, is facing financial difficulties due to the high operating costs, and is in a situation where a loan to the house of his younger brother is also being held. He was much healthier than others as a national volleyball player until he used a humidifier disinfectant, and now he is in a difficult position to sustain his life without the help of various medical devices. He visited Ahn on the 2nd of last month, but he was undergoing dialysis because his kidneys were not improving. According to his family, Ahn communicates with his family by writing in a sketchbook when he is in good condition. When the lungs are not good, it is enough to wander around. Lung transplants are often the only hope for those who are in a state where their lungs are no longer accessible, but only a few are actually undergoing transplants.

Kim Eung-ik, a victim of humidifier disinfectant, is lying down after being hospitalized at Yonsei University Severance Hospital in Sinchon, Seoul in May (pictured left). Kim had a lung transplant last June and is now recovering. On the right is a sketchbook containing the contents of Ahn Eun-ju, a victim hospitalized in the same hospital, complaining of pain while sharing a writing conversation with his family. Ahn, a national volleyball player, is repeatedly hospitalized and discharged whenever his condition worsens after undergoing lung transplant surgery. Reporter Kim Ki-beom

Kim Eung-ik, a victim who was in the same hospital as Ahn, is a very lucky case. He was taken to the emergency room for shortness of breath and was diagnosed as needing a lung transplant after receiving treatment, and he was in a situation where he had to wait without hesitation after discharge. Luckily, I had surgery with the right lungs suddenly secured, and now I'm recovering.

Mr. Kim, who met in the hospital room on the 2nd of last month, said, "Before the surgery, I wore an oxygen generator and I was on the verge of dying because it was difficult to breathe." Currently, about 30 of the humidifier disinfectant victims have undergone lung transplantation, and some are waiting for lung donation for over a year. Even with a lung transplant, it is difficult for the lungs to function properly for a long time.

Some of the victims' families take on extreme actions, blaming themselves for causing their children or parents to suffer. “I will prove the damage with my body,” said Lee Mo, the mother of victims living in Daegu, and intentionally inhaled it by putting a humidifier disinfectant in his room humidifier. Lee's actions close to self-harm without his family's knowledge are known to the'Humidifier Disinfectant Incident and the Special Investigation Committee on the 4/16 Year Old Disaster' (Special Task Force), and many people are holding him back. Lee said on the phone with a reporter, "I'm also a timid, timid, and ordinary mother, but there must be countless victims like our kids, but it's too unfair that I can't even be recognized for the damage."

Lee's eldest son was born in 2003 and is a second high school student, suffering from a number of respiratory diseases such as interstitial pneumonia and asthma, but received 4th stage in the government's damage judgment. The second daughter was born in 2006 and suffers from a number of respiratory diseases, such as asthma and chronic sinusitis, but was judged in the third stage. Mr. Lee said, "When children were young, they used a disinfectant for the purpose of cleansing them while using a humidifier for health, so it was painful as it was squeezing their breasts because it made them to this point." He used Oxyrekit Benckiser and Aekyung Industrial products, which made the most of the victims.

Recently, the oldest child has newly suffered from cardiac hypertrophy, and the second is that new diseases such as epilepsy appear. Lee burst out crying about the fact that the two teenagers suffer from five or six respiratory diseases, but they do not properly acknowledge the damage. The victims of Stages 3 and 4 are unlikely to win civil affairs. Throughout the conversation with the reporter, Lee cried and coughed. Currently, about 1,700 children and adolescent victims are counted, and they can live with respiratory diseases for life.

In 2013, the
scope of recognition was expanded after being limited to'lung disease' by the government ... Still
less than half of the 6823 government-funded reports

I am upset by one-sided promotion of the'Relief Act Enforcement Decree', which is missing the core'recognized disease range'

When the first damage judgment began in 2013, the government limited the recognized diseases to lung diseases. Although a number of studies have since revealed that various diseases can occur due to humidifier disinfectants, the government is still limiting the range of diseases that are recognized to damage only asthma, fetal damage, toxic hepatitis, and interstitial lung disease in children. As a result, only 930 of the 6823 people who reported damage as of last month's 31 receive government support for relief benefits. There are 2239 people who receive some financial assistance for special relief, and 3203 people have yet to receive any assistance.

In 2013, when the damage was first determined, scientific studies on the damage pattern were lacking, but now a number of studies show that humidifier disinfectants can cause not only lung and respiratory diseases, but also various other diseases such as skin and cardiovascular system. However, the scope of the government's accreditation remains narrow.

Recently, the Ministry of Environment announced a preliminary proposal for the Enforcement Decree of the Damage Relief Act, but there was controversy over this content. At a public hearing on the Damage Relief Act held on the 5th, victims strongly protested the contents of the legislation notice of the Enforcement Decree of the Damage Relief Act in a completely different direction from what has been requested so far. There was even a physical conflict, and the hearing on that day was ended. The reason why the parties strongly opposed the bill to help victims is that the most important content, the health damage screening, is not properly prepared. On the 24th of last month, the Ministry of Environment announced that “we will review only whether the requirements such as exposure and disease diagnosis are met for rapid relief (of the victim).” At first glance, it seems that the content will be promptly screened for the victims, but the scope of the most important damage-recognized diseases has not been disclosed. The Special Assistance Committee also pointed out 20 problems in the contents of the legislative notice and requested the Ministry of Environment to improve them.

If you truly want to solve the humidifier disinfectant problem, legally acknowledging that the state is responsible is the urgent priority, experts, civic groups, and victims agree. Recognition of national responsibility is important because it can provide a broader and more practical aid than it is today in assisting and compensating victims. However, the government is on the lookout for the suffering of the victims, saying it has to wait for the court's judgment on state responsibility. Legal and administrative experts point out that there were legal deficiencies in the responsibility for managing humidifier disinfectants and coping after damage, and that government ministries were trying to evade responsibility or cover up the problem.

Catholic University Sociology Professor Lee Young-hee said, “The issue of humidifier disinfectants is a matter that can clearly hold state responsibility, and only by acknowledging legal responsibility will the state be able to more powerfully solve the problem.”