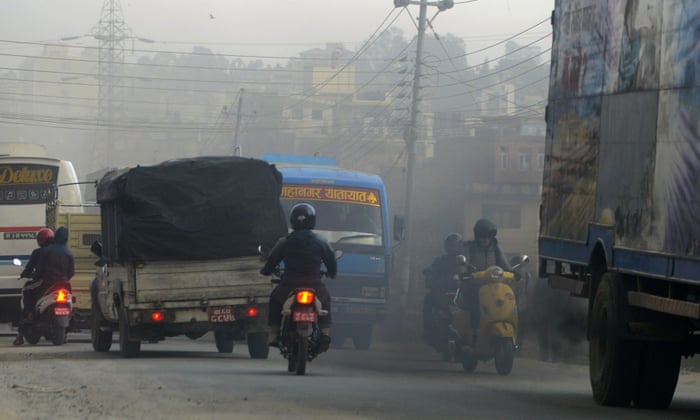 The global human health impact of the diesel emissions scandal has been revealed by new research showing a minimum of 38,000 people a year die early due to the failure of diesel vehicles to meet official limits in real driving conditions.

Researchers have created the first global inventory of the emissions pumped out by cars and trucks on the road, over and above the legal limits which are monitored by lab-based tests. Virtually all diesel cars produce far more toxic nitrogen oxides (NOx) than regulations intend and these excess emissions amounted to 4.6m tonnes in 2015, the team found.

This led to at least 38,000 premature deaths due to heart and lung disease and strokes. Most of the deaths are in Europe, where highly polluting cars are the main culprit, and in China and India, where dirty trucks cause most of the damage.

The work also shows that, even if diesel cars did meet emissions limits, there would still be 70,000 early deaths per year. Excess NOx emissions are rising, the researchers found, and strict pollution controls need to be put in place to avoid the death toll rising to 174,000 in 2040.

“The consequences of excess diesel NOx emissions for public health are striking,” said Susan Anenberg of Environmental Health Analytics in the US and one of the team that did the research, published in the scientific journal Nature.

“Manufacturers know how to make their cars clean and they are actively choosing not to,” said Ray Minjares, at the International Council on Clean Transportation(ICCT) in the US, also part of the research team. “The question for the public is: are we comfortable with that situation? Why are manufacturers who sell vehicles in Europe choosing to provide Europe with dirtier versions of the cars they sell in the US?”

The researchers only estimated the early deaths attributable to NOx as a result of it forming tiny particles and ozone, a link that is well understood. It did not account for the direct harm of NOx on health, which is currently harder to estimate, meaning the true number of early deaths could be much higher.

“This rigorous study highlights the serious consequences which have resulted directly from the irresponsible actions of the motor manufacturers,” said Prof Roy Harrison, an environmental health expert at the University of Birmingham in the UK. “It may well underestimate the full consequences for public health.”

Harrison said his research suggests that the premature deaths from NOx could be 10 times higher than those from exhaust emissions of particles. Legal action has forced the UK government to produce new plans to tackle the public health crisis caused by NOx, but it has been dismissed as “weak” and “woefully inadequate”.

The new research covers 80% of the world diesel market, including Australia, Brazil, Japan, Mexico and Russia. But some of the countries not included have no emissions standards at all, which is again likely to mean the true number of early deaths is higher.

“This important study shows that there is a measurable effect on deaths from ‘excess NOx’ owing to the extremely flawed EU emissions tests for diesel cars,” said Prof Jonathan Grigg, an expert in child respiratory and environmental medicine at Queen Mary University of London and a member of the Doctors against Diesel campaign group. “It demonstrates that removing the current highly polluting diesel fleet from UK roads is an urgent public health issue.”

The diesel emissions scandal erupted when Volkswagen was exposed as having installed “cheat devices” in their cars, a revelation in which the ICCT played a major role. But all manufacturers have produced vehicles that are far more polluting on the road than in official lab tests.

“To varying degrees, all automakers are effectively utilising techniques and strategies to disable or turn off vehicle emissions control systems that they have installed on the vehicles,” Minjares said. “We show in the study that this is a problem across the fleet and it is a problem that is global.”

Minjares said two-thirds of all diesel vehicles, wherever sold, follow EU standards: “So to the extent that Europe gets its vehicle emissions standards wrong, which it has continued to do [for cars], the rest of the world gets it wrong as well.”

The researchers point out that some new cars and trucks do meet emissions limits when on the road: “Recent tests indicate that real-world NOx emissions in line with certification limits are technically achievable.”

A spokeswoman for the Society of Motor Manufacturers and Traders, which represents carmakers in the UK, said: “Industry is committed to improving air quality and is investing billions in new technology to reduce emissions. The biggest change to air quality will be achieved by encouraging the uptake of the latest, lowest emission technologies and ensuring road transport can move smoothly.”

Penny Woods, chief executive of the British Lung Foundation, said: “This landmark study is a huge wake-up call for governments globally. There’s no doubting this is an international health crisis. The most vulnerable – children, the elderly and people living with a lung condition – need decisive action now.”

“These unnecessary deaths are being caused by carmakers abusing emissions rules whilst regulators turn a blind eye,” said Julia Poliscanova at the campaign group Transport and Environment. She said carmakers should be required to recall and fix their polluting diesel cars.

In March, researchers from MIT in the US estimated that the excess emissions from VW’s vehicles alone led to 1,200 early deaths in Europe between 2008 and 2015. New road-based tests are being introduced by the EU but emissions of more than double the official limit will still be allowed for a period as the industry adapts.